Navigation Study in Greece > Living > Before Arrival > How to get there

How to get there

By far the easiest way to get to Greece is by air. There are direct or corresponding flights to many Greek destinations from diverse major airports. Even if your starting point is North America, Australia, New Zealand or South Africa, the most cost-effective way to Greece may well be to get to London – or Amsterdam, Frankfurt or another Northern European hub – and pick up an onward flight from there.

Depending on your country of origin you will have to book your ticket and plan your travel to Greece. Airfares are higher during summer time, mainly July and August. May, June and September are also popular, and since far fewer flights operate through the winter, bargains are rare at any time. Booking your airtickets early, can reduce your travel costs. There are great fares to Greece during the off-season period.

The most common destination cities to enter Greece by air are: Athens (the capital) and Thessaloniki.

The airport is accessible via Metro Line 3 “Aghia Marina – Athens International Airport”.
The ticket costs 10.00 Euros and it is valid for one trip to or from the airport and you can go directly to the city center, like Suntagma Square, Monastiraki, etc. 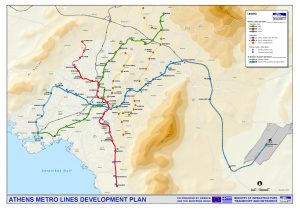 Athens International Airport is connected via the Suburban Rail with:

Further information regarding timetables, and prices can be found in the official page of suburban railway.

There are several bus lines to and from the airport. All buses depart from the designated area on the inner curbside of the arrivals level of the Main Terminal Building right outside the Exit (doors 4-5).

For Express Lines the ticket costs 5.00 Euros and is good for one trip to or from the airport. You can buy tickets from the driver or at the bus stations ticket offices, outside the bus terminal.

More information regarding transportation to and from the Athens International Airport can be found at the official site (http://www.aia.gr/traveler/), at the access and transportation section.

Fare from the airport to the city center is approximately 12 – 15 euro.

Metro line in Thessaloniki is under construction.