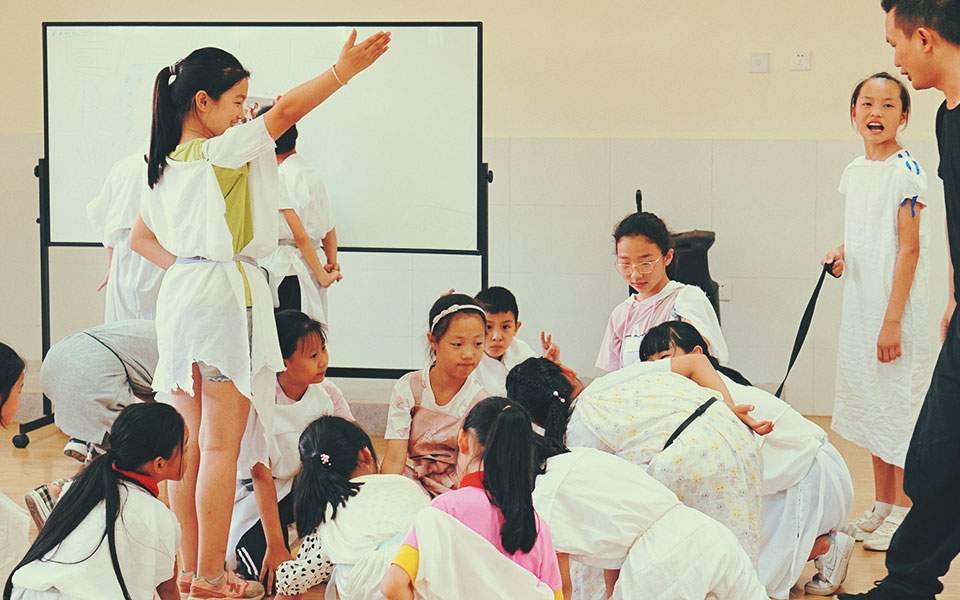 From Ancient Athens of Plague to Modern China of Coronavirus

From Ancient Athens of Plague to Modern China of Coronavirus

An imaginary trip to Athens, during the plague and the Peloponnesian War, was made by the elementary school students in Chengdu of Southwest China, through the animation starring the young Athenian Myrtis and thanks to their visionary Chinese teacher.

In 430 BC, the second year of the Peloponnesian War, during which the Spartans besieged Athens and the Athenians were struggling from the plague, the eleven-year-old elementary school students were transferred from Chengdu in southwestern China to the ancient Athens for two months. Myrtis, 11-year-old Athenian, a victim of the plague, who has been “resurrected” thanks to Professor Manolis Papagrigorakis and the United Nations, and now stars in a pandemic animation, led them on this imaginary journey through time. Among others, Chinese. The mystery of the little Chinese children in the ancient Greek spirit is their 34-year-old teacher, Miao Bin, a graduate of the Department of Theatre Studies of the University of Peloponnese, who lived for a long time in Greece and in recent years worked systematically to achieve his goal : to teach ancient Greek theater in his homeland.

“The rector of the Affiliated Elementary School of Chengdu University asked me to take over the position to teach drama education,” Miao Bin explained to Kathimerini. This is a revolutionary initiative for the Chinese education, as until today there have been few such drama classes in primary schools, and also few teachers who have professional background, especially received relevant training in Greece. “Some weeks ago, my professor, the archaeologist Maria Mikedaki, suggested me to translate the video of Myrtis into Chinese,” Miao Bin recounts how he was involved with the famous Athenian and how he “married” history masterfully with the ancient theater and also the modern, gloomy reality of the pandemic. “The video moved me a lot, not only because of the story, but also because I realized that it can help children of the same age better understand the current situation.”

Knowing the historical context and having the appropriate attire, Miao Bin used methods of theatre education, asking students to play the Athenians of the time, who survived between two asymmetric threats: the enemy at the gates and the plague inside.

“After her body was buried under ground for so many years, how could they find her?” “What can a virtual person think?” These were some of the students’ questions about the first and the “second” life of their peer, when Myrtis was introduced to them in the first lesson. Hearing about the food and medicine shortages of that time, the students – even those who do not live in affluent families – decided to eliminate these timeless problems.

Miao Bin brought the students ancient Greek costumes and asked them to sew a chiton on their own, following relevant instructions from a video made by the teacher. This is a “feat” to which they responded perfectly.

Knowing the historical context and having the appropriate attire, Miao Bin used theatrical methods, such as role playing and improvisation, asking students to play the Athenians of the time, who survived between two asymmetric threats, the enemy at the gates and the plague inside. “The children realized that the victims of wars and epidemics are people next door, such as Myrtis, while many of them connected it with today’s world and felt lucky that in our time there are rarely wars  and medical science have evolved rapidly”.

These eleven-year-old Chinese students attended the drama classes for only two months this year, as their city had been in quarantine for a long time. According to the urban legend, Chengdu, home to 16 million people, has always been a paradise in China, “a city you will never leave.” However, everyday life even after the quarantine was difficult: students and teachers needed to be tested for body temperatures every morning, had lunch separately at noon, and on each floor, there was only one class.

This model of experiential learning excited the children and the parents in Chengdu, as it broadened children’s cognitive horizons and cultivated their empathy. The innovative teaching of the new subject was presented to the local media. Therefore, Miao Bin is preparing to continue teaching the Myrtis drama class in the next school year. “I am preparing to teach 11 classes, that is, 500 to 600 children,” he says happily. While he has contributed to twinning Chengdu with Athens and Patras to be sister cities, he told that we will see more interesting Greek-Chinese collaborations in the coming years. 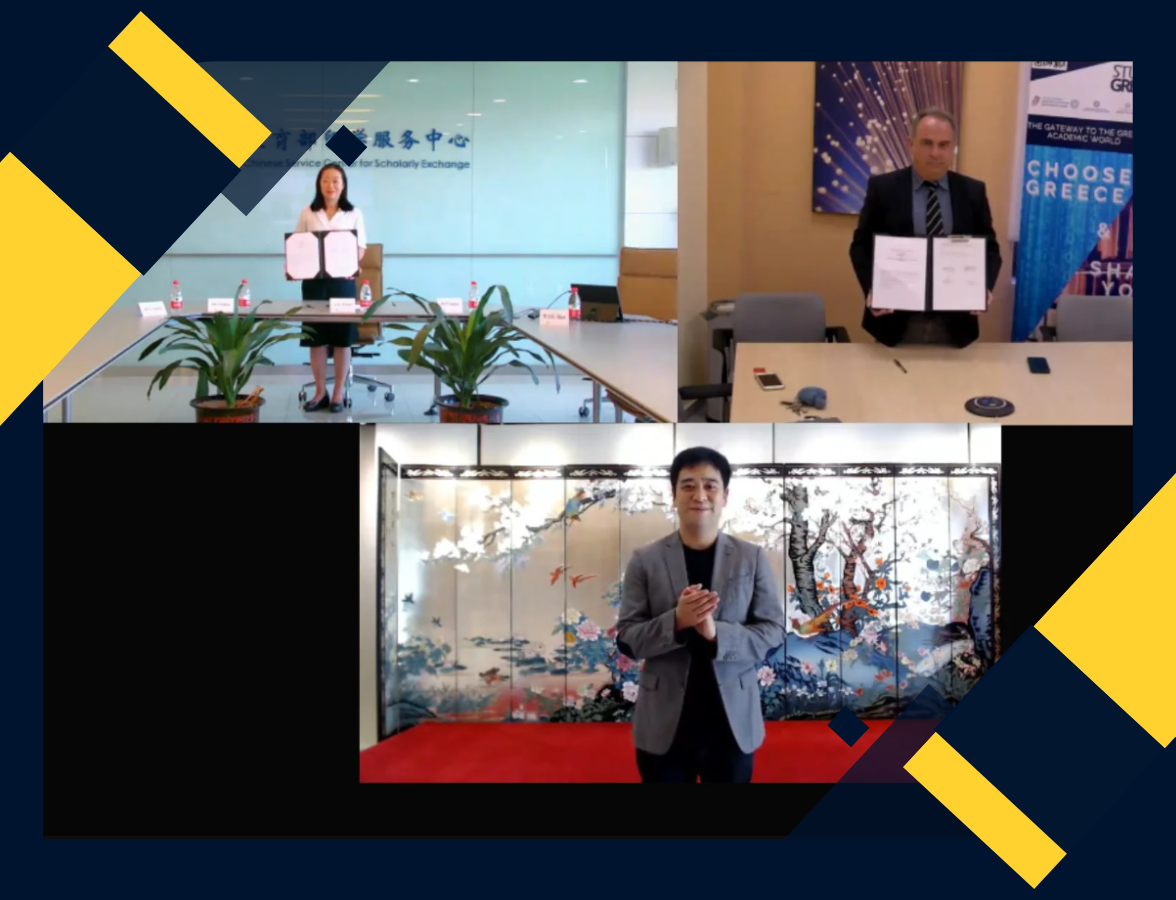 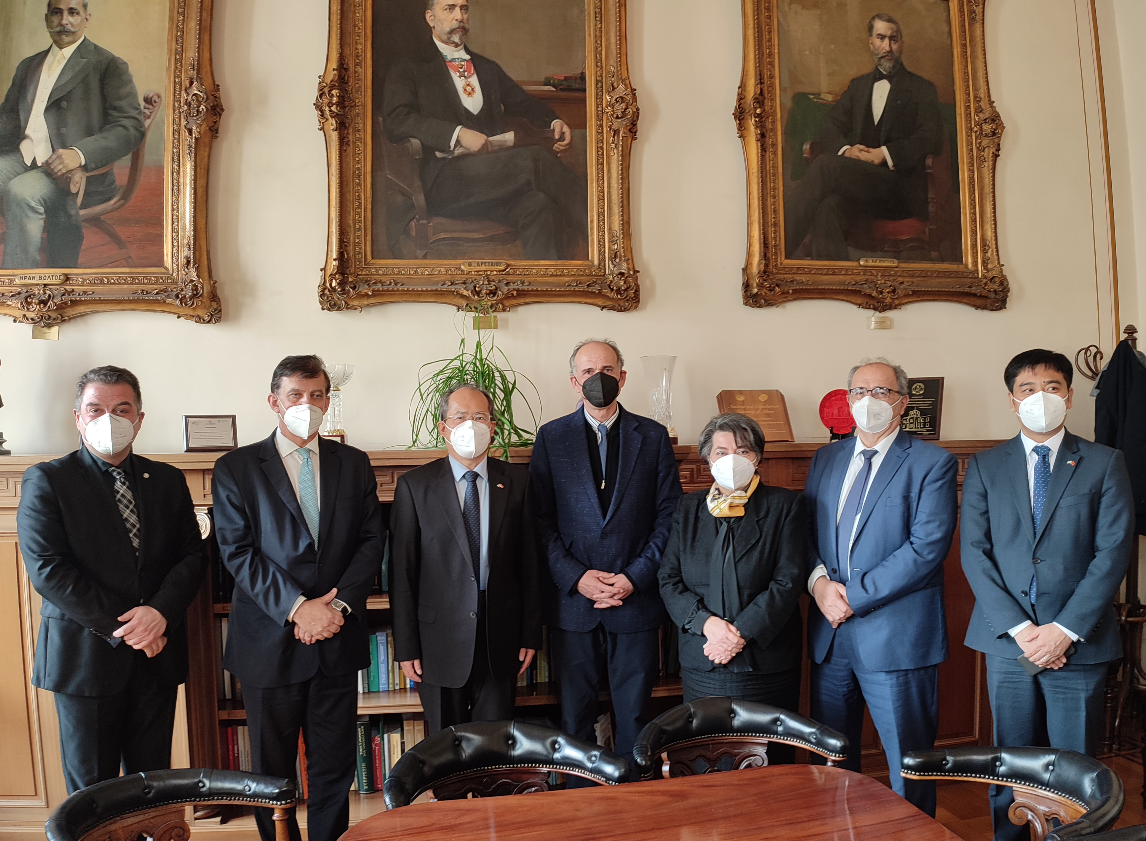 The Ambassador of the People’s Republic of China to Greece Mr. Xiao Junzheng in NKUA

The Ambassador of the People’s Republic of China to Greece,

On Monday, February 7, 2022, the Rector of the University